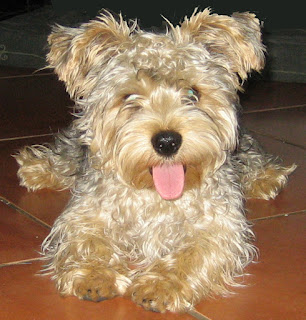 If I believed in reincarnation, I would seriously wonder about the past life of our puppy.

Coco, who originated from two litters born at the same time which were amalgamated into one big mass of dogs; one of eleven, has a zest for life that is incorrigible.  So aside from sleeping in between pillows in the most bizarre and strange positions, hiding his head in the corner when he’s scared (I assume those to be reminiscent of the pile of puppies from whence he came), burrowing in mud immediately following his bath, chewing on his own foot and seeking out the garden sprinkler on a regular basis...
He has a fascination for socks and underwear that he steals from the laundry basket and hides in the cushions of the sofa...

Yes, I know..., a huge embarrassing moment just waiting to happen.  Can’t wait until I have guests in my house sitting on my sofa and voila, behold, in lieu of a napkin, we have...

Needless to say he has some seriously dodgy, doggy proclivities.

But this is not new; we all seem to have taken a little baggage from our past.  The US election results were announced first week of November and I cannot help but wonder if the results aren’t remnant of some unearthed, age-old skeletons that many would prefer remain forgotten.

For two weeks ago a country that is supposed to be the watchdog of democracy, freedom and prosperity (to those of us situated in floundering democracies), demonstrated that instead of constructive vision and integrity, racism and sexism now gets you to one of the most powerful positions in the world; a position that is ironically supposed to uphold the value of humanity.

The scary part is: that when you fail to deal with your past, it usually destroys your future.

Talk to us, we know... it’s a pursuit of objectives SA is also busy with.  Corruption, violence, racism,... we too are working hard to pee on the hard earned progress made under the constructive leadership of the likes of former SA President Nelson Mandela.
I just hope that for the sake of Americans and the rest of the world, US President Elect Trump’s vision is to truly make America great and not to be the biggest dog with the largest bone at the expense of the United States and the rest of the world.

For if destructive ideology got him into the white house, I for one, seriously have my doubts as to his intention to be America’s knight in shining armor rather than the dog who bares his teeth at everyone else... Grrrr.

I believe Trump’s election to office is a reflection of something called ‘mathematical visioning’ 1 which is a calculated reflection of what the [almost] majority have been thinking but not saying aloud.  But thanks to a secret ballot, that voice has now been heard.

Unfortunately sometimes, it really is a good idea to hide your dirty laundry, not air it out in public.

And hopefully in a hiding place a little more strategic than Coco’s.

For according to Trump’s account of the American reality, many Americans may find themselves falling short of Trump’s definition of ‘American’... in his quest to restore “law and order,” “secure borders “ and provide “protection from terrorism.”

And Barack, sorry, US President Barack Obama, you might be one of them.  But then again, since you have accumulated a large pile of bones, maybe you can stay...

Needless to say, Trump has clearly communicated his intention to do more ‘sniffing around’.

Destructive leaders like to brand themselves as the ‘solution in times of trouble’ and ‘the only one who can’ and who leverage fear and control as opposed to influence as the stick of change and tell you that it’s the best thing you can do ‘for your children’.

All I can say is that from a leadership perspective; beware the lone wolf.

So like Coco, who exhibits no tact and no consideration as to the consequences of his actions, we find that for the sake of all those involved and in a proactive effort to avoid the potential embarrassment he can cause, he, like tyranny, sometimes requires a leash.

Posted by The Change Addict at 09:00 No comments:

I am looking for those people.

You know; ‘those ones.’
The ones that everyone seems to know about; but nobody actually knows.  You know; those people.  Surely somebody should know someone.  You hear about them all the time.  Always less sophisticated than the people who talk about them.  Always never like us.  They are all the same.  Those ones.

Maybe its time to be asking... does anybody have something new to say?  Does somebody actually know what they are talking about?
So I am looking for those ones to find out if it is true.  Could there really be a population of people who are really all the same?  Not like ‘my own people’ to whom the grace of individuality has been extended to explain away our own ‘bad apples’.  You know; ‘those ones’.  “They’re all like that.”

Not sure about you..., but I am confused.

My diversity of life experience has destroyed any illusion that I can claim to know anything about ‘those ones’.  I’ve lived in too many places; have too many people I care about, crossed to many cultures to know that ‘those ones’ are always very much like me.  That ‘those ones’ are me and I am ‘those.’  And any of ‘those’ are likely to be in my direct family or circle of friends.

The luxury of ignorance is not in my corner on this one.  As soon as someone starts talking about ‘those ones,’ I know they don’t know what they’re talking about.  What becomes abundantly apparent is that they know so little about their own humanity that they can look at other people and convince themselves that they have nothing in common.  They’re not like them.  They’re better.  That is a lie.  It is really too bad that they’re simply human too and are unaware.
And as long as we continue to dialogue about ‘us’ and ‘them’, we lose touch with our humanity and grieve our Creator.

And so while I continue to hear so much about ‘those ones’, about how they are and what they do, for the life of me, I cannot seem to figure out, who the hell are “those people” anyway?

Does anyone actually know them?

Email ThisBlogThis!Share to TwitterShare to FacebookShare to Pinterest
Labels: change, value in humanity

Listen Dumbo, Get out of my Face - A Call for an Increase in Common Sense

I recently sent through a strategy document that focused on social development and received a very polite, ‘thank you very much but we don’t think you are qualified to advise’.  That’s the politically correct version, of “Listen Dumbo, get out of my face”.  The funny thing about strategy is that it needs to address the question at hand and I think the biggest and most common mistake that we make is asking the wrong questions and as a result; we define the issue incorrectly.

It would appear that I continue to have some of my least intelligent conversations with experts.

I dread a conversation with ‘experts’.

I swear that something must happen after someone is handed their PhD papers.  The brain goes on leave or something.  They are the quickest to power play and seldom answer my questions (my assumption is that their expertise has run out – their assumption is that I am simply so not on their level).  Whatever the cause, it seems almost impossible to teach an ‘expert’ anything or get a straight answer.
My latest conversation with a so called ‘expert’ went something like this;

“So let me understand this, you want to increase the regulation and policy on a trade that is already illegal”...

“Yes.  In order to better manage the current situation we need to focus on the policy, legal and judiciary aspects of the trade.”

“Okay, but the trade is already illegal and statistics indicate that this intervention strategy has had little to no effect to date.  So the fact that the trade continues means that the people who are engaged in trading have little to no regard for the law, which would suggest that making more laws will have little to no impact... Thus the definition of ‘illegal’...”

The dialogue degenerated rapidly from there.  Am I the only one who thinks that making more laws to manage people who simply disregard law as a waste of time, money and effort?  Why is it that when ‘an expert’ is not able to answer your questions your qualifications and title becomes automatically relevant.
One of the biggest questions that is seldom asked is:  Is it working?  Are we getting the results that we are looking for?  What is the bottom line or cause (politically correct for ‘why’?)?
And so having this experience regularly has highlighted another question; what makes somebody qualified?  Somebody with experience...  Somebody with knowledge...  Somebody with an education in the field...?

These so called ‘experts’ that we hold in high esteem are often well equipped with knowledge.  They hold a piece of paper which they earned by researching a subject that is narrow in focus and makes them a specialist in a very specific field; a ‘paper’ which somehow in today’s society places them as an ‘expert’ in some field.  But somehow, possessing knowledge and the application of knowledge seem to be different activities all together.

There are a few more things I think should be asked of someone when holding ‘experts’ in high esteem and those are:  What is their track record?  Do they hold a stake in the outcomes that are being sought?  How do they weigh the significance of result and process?  (Working hard and producing nothing, nor should getting the results at all costs be held in high esteem)  What are their intentions insofar as contributing to the matter at hand?  Do they actually care to use their expertise in a way that contributes positively to society and achieve the results that have been prioritised?

When a position held or expertise sought is to attain money and power... whatever the decisions, the outcomes will generally not be ones that will benefit the majority.

This way of thinking is not new and is bound to reoccur in a society that holds in high esteem; money, position and power.
Another conversation of note with an ‘expert’ concluded something like this...

“Please excuse my wife as she is just not that educated you see.”  A statement followed by a condescending little pat on her arm and a flicker of hurt on her face.
A statement said to the same wife who raised his children while he pursued his PhD.  A statement to the same women who got pregnant in high school with the same man and who paid her in dues in lost opportunity and a life time spent with a man who now looks down at her.  A woman who, even though he is the reason why she never had the opportunity to pursue her own dreams, is the reason he has a PhD today.

“Yes, there we agree.  There is a fool in the room.  But it’s just not your wife” I think to myself.

Thus, my conclusion on the matter is quite simple.  There is a big difference between knowledge and wisdom and an educated fool is simply that: a fool with a bunch of papers.

That being said, isn’t it time we start addressing the issues and the outcomes?

Posted by The Change Addict at 09:42 No comments: